Why don’t you transcend?

If you are alive, you have some kind of struggle.

Even having everything that would make any human happy, would still create some kind of struggle.

I’m not interested in whose struggle is the biggest or most important.

The question that I’ve always come back to is: what does it take for me to transcend my struggle? To get closer to my goals?

It’s a very simple question and you would think the answer is equally easy. I guess, you locate what the issue is and you resolve it. DONE!!!

Unfortunately, even though that is extremely easy to do, we don’t do that.

I’ve always been fascinated with the human ability to adapt in even the most extreme situations.

However, some people keep their head down just coping with the given situation, but not actually overcoming their issue, while others not only survive but also transcend it.

The people that transcend don’t magically know what to do since birth.

Instead of magic, is it maybe instinct? And don’t we all have instincts? Why don’t we use it if we do?

Is it Instinct? Is it Perspective? Is it something else?

What I’ve discovered is that along the way, we get used to shushing our instinct and go with what “makes sense”. What is already exhibited in your society.

We go by the fixed boundaries that we have been conditioned to believe in.

That is what we call in other words “normal”.

If we witnessed abuse (any type) as a child, then we will accept abuse (usually the kind that we were unknowingly exposed to).

But on the other hand, if we witnessed transcendence, then that becomes our boundary.

Boundaries = How far have you been conditioned to see yourself reaching?

The issue is that each of our brains perceives the same exact thing differently:

Seeing someone climbing over a fence focused on freedom could be seen as transcendence, but not to the person who is focused on the authority figure in control of the fence.

Knowing about how powerful our perception is, unfortunately, is not enough.

Because, we KNOW what to do, but that doesn’t mean that we will take action on it.

Something else is necessary to become a person of action with a new set of personal rules.

The end of the road, the last piece of bread, complete silence.

Imagine that you are chased by a wolf.

You are all alone.

You have no outdoor skills.

At some point, you realise that you are running towards a cliff.

Reaching the edge, you obviously have 3 choices: you stay and be eaten by the wolf, you jump into the void and hence to certain death, or attempt to climb down with an old rope.

The first two options have a fixed outcome, but the last one floods you with hope.

Naturally, even though you don’t know what you are doing, you hurry towards the rope and try your best, while getting deeply scratched on the edge of the cliff, to climb as low as possible before the wolf reaches you.

Even though you manage to get the hang of it, you realise there is no more rope left.

You’re afraid of heights and this is forcing you to look down.

But not swinging and not jumping, means you let go and die. Undeniable fact.

Swing and jump, you barely make it. Slowly but surely you get down to find help.

Obstacles are the way

So, let’s say that we’ve had an objective (as possible) perspective on the cause and possible solution(s) of our issue.

And then, we have harnessed our instinct to the point of noticing what makes us uncomfortable and anxious.

Now we need the problem to challenge our values.

We now need to be aware of when we feel like we have no other choice but to become better.

Taking responsibility for our actions is the bravest, but the hardest thing a person can do. Because most of the time, it means we need to admit that we were wrong. ∼ Nicole

Does your daily shower force you to accept a body that you have neglected or just never paid attention to?

Does hearing your neighbour scream at their child day in, day out make you feel like an accomplice?

Does your endless browsing on social media make you feel less-of, even though you know how real life looks like?

Are you jealous of someone who travels, while you feel stuck?

All these seem like obstacles. But they are not.

They are ALL paths.

We get to decide when we’ve had enough and when we’ve wasted enough years on something that we despise or on being someone we despise.

We need the clarity and perspective to see us like what we actually are: a loser.
∼ Nicole

Just like being on the cliff, we are given options: go with certain “death” or risk doing what might save our soul, even though no one has taught us how to do it. 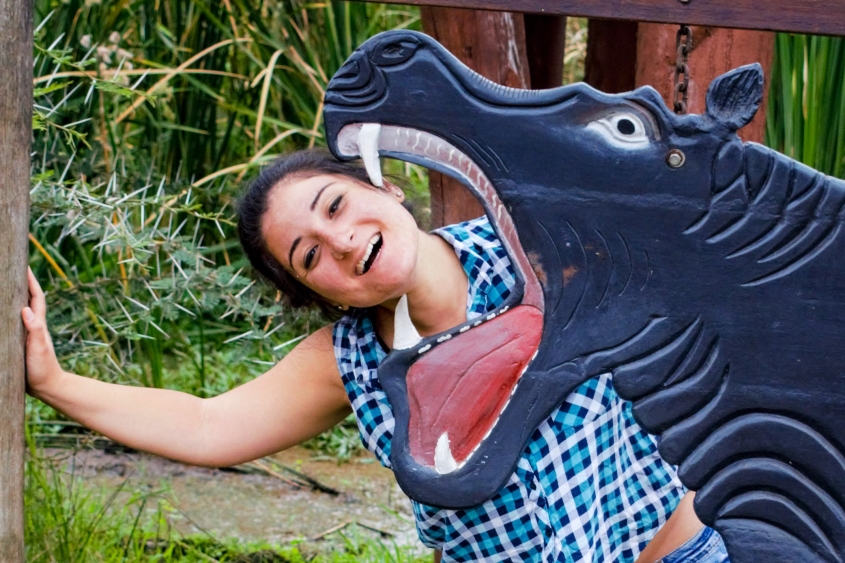 This photo was taken at lake Manyara, Tanzania, in 2017.

My face has yellow and red patches because it had peeled off from all the UV and chilled winds that were coming at me from every direction up on Kilimanjaro just two days before this photo was shot.

And I smile, because now I know what I need to do when I get back home.

This photo would have not even been taken if I hadn’t begun transcending a little over a year earlier.

Actually, the 2015 version of Nicole would have laughed if you had told her that she would visit Africa soon. 100%.

Dreams cannot be made, they cannot be gifted and they are not goals to be reached. They are dark ditches that you need to climb down to and overcome your worst fears in order to earn. ∼ Nicole

Go explore Nicole,
no one is holding
you back.

This site uses Akismet to reduce spam. Learn how your comment data is processed.